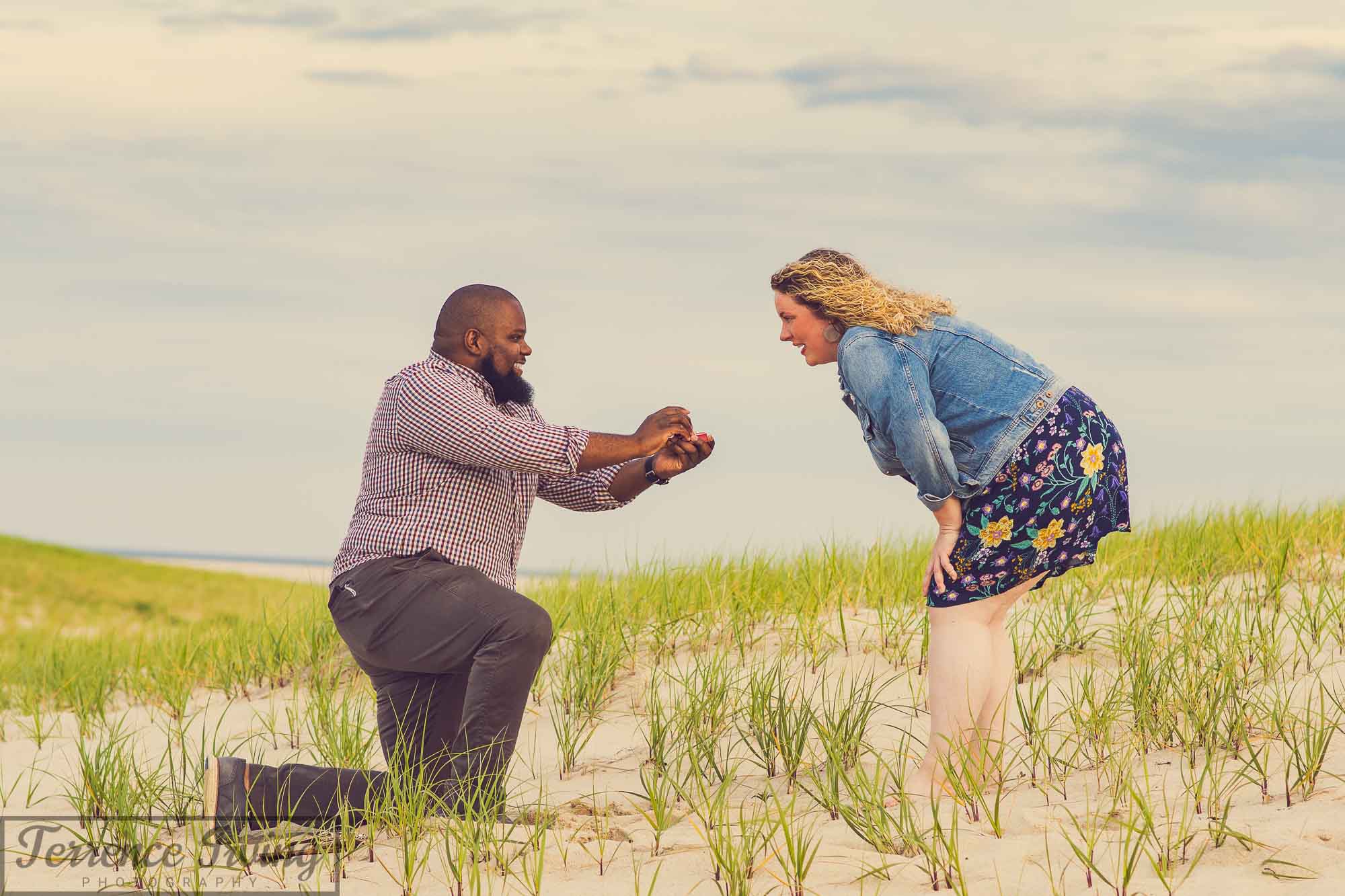 Almost three years ago (on June 2, 2018) I took the most important photo of my life, my own marriage proposal photo. That was the day that I proposed to my beautiful fiancé, MaryKate, on Chatham Lighthouse Beach. Read on and I’ll tell you how I did it!

Setting the scene for the proposal selfie

Here’s the scene: last spring, we decided to take a trip to Cape Cod early in the spring. We settled on Chatham and booked our stay at the lovely Chatham Motel. We planned our trip to be off season and it worked out; there was none of the nightmare Cape traffic I’d heard about. Also, most of the time, things were pretty calm.

It was Saturday, June 2, 2018 and we had just spent the day exploring Chatham and Provincetown. We headed back to the motel in the late afternoon to plan our night. I proposed that we make dinner reservations and head down to the beach for some nice photos of ourselves before eating. Luckily for me, being on vacation gives me a good excuse to have a camera with me constantly. So, I know she didn’t suspect a thing when I suggested that we take some selfies with my “real” camera.

Once we arrived at the beach, I took a few test shots of MaryKate to get things going.

The build-up to the actual marriage proposal photo

Once the camera was set up, I was probably shaking quite a bit. So, I started cracking some jokes to keep things light. Then I made way over to join MaryKate in frame.

I was too nervous to remember that MaryKate’s got a “side.” No problem, she reminded me and we switched.

Now, you might be wondering where the ring was. Look closely at my right pant pocket; it’s a little too square for a normal pair of pants.

Well, it was time to do this. With the camera still firing away, I started to get into position…

Now, remember that the wind is whipping away at us, meanwhile there were a few other people present on the beach that night. The point is that I THOUGHT the camera was still taking pictures, but it was a little hard to hear the telltale “snap” of the shutter. It wasn’t exactly appropriate or feasible to say, “hold on a second, I’ll be right back.” The show had to go on!

And finally, the moment had come. If you’ve followed my photography at all, then this one should look familiar to you!

When I edited it, I really wanted to accentuate what I saw that day, which was a gentle blue sky, bright green grass shoots, and the look on my fiance’s face as she looked at the ring!

Just to prove that this wasn’t a big setup, here’s a couple of photos of what happened next:

She said, “Yes!” Can you imagine how awkward dinner would have been if she didn’t?

And I’ll leave you with this, which is hanging on our living room wall (remember to print your photos):

In Closing: DIY Is One Way…

As you can see, I was telling the truth all along! I did, in fact, take my own marriage proposal photo. Now as I prepare to shoot another engagement session this weekend and my first wedding this fall (edit: back in 2019).

But I have to say, there’s a better way to capture one’s own proposal.

My biggest piece of advice on capturing your proposal is this: hire a wedding photographer to do it for you. Trust me, you do NOT want to mess this up! I’ve had the pleasure of capturing another surprise proposal. It was awesome to be trusted to do so. Click below to check it out!

Do you need a proposal or wedding photographer?